Will Active Management Come Back into Vogue?

The Active/Passive discussion has been robust since the mid-1970s when the first index fund came into being. But during 2014, a year that proved to be particularly challenging for active U.S. equity managers, the debate rose to a fever pitch. With only 10-20% of active domestic managers outperforming their benchmarks, many investors have been left questioning whether they should more fully embrace passive management.

Given the inability of all but a small percentage of managers to generate excess returns in 2014 and, more broadly, through much of the bull market that began in 2009, on the surface this would appear to be a pretty reasonable conclusion. However, when we take a look back through decades of data, we find extended periods when the majority of active managers have outperformed their passive counterparts. Looking at the chart below one sees a vague cyclicality to the swings in outperformance (blue line above 50%) and underperformance of active versus passive managers. 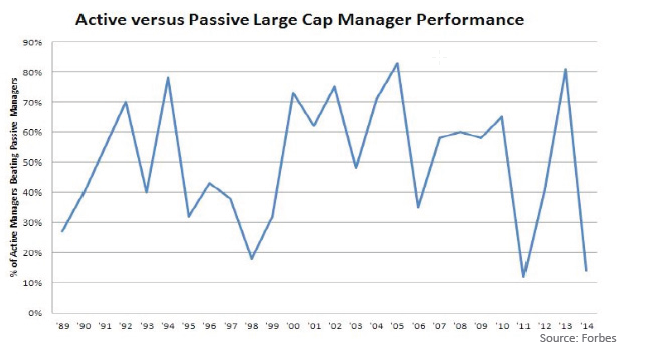 When we see a chart like this, we question why the debate surrounding active versus passive is often so polarized when there are clearly times when each can claim a performance edge. From a timing perspective, we would argue that we’re likely at that pivotal point when active managers will outperform. Famed investor John Templeton said, “The time of maximum pessimism is the best time to buy.” We would argue that with the percentage of active managers adding excess return at historic lows in 2014, we’re at a point of maximum pessimism. Headlines claiming the death of active management would further support this assumption of extreme pessimism.

But let’s take a look at active versus passive management from a more fundamental standpoint. The following chart created by Joe Mezrich, head of quantitative investment strategy at Nomura Securities, details the connection between interest rate moves and management style.

When interest rates rise, active managers tend to beat their benchmarks. From 1962 to 1981, when the 10-year Treasury yield more than tripled from 3.85% to 15.8%, the median cumulative return for large-company mutual funds was more than 62% better than the S&P 500 or an average of 3.2% per year. That lead reached 70% in 1983, and then steadily eroded as interest rates headed down. Active managers have since given up the lead and then some. When we look at this trend on an annual basis from 1962 through 2014, we see that active managers have beaten the index by an average of 1.5% in years when rates moved higher and underperformed by an average of 2% when rates moved lower. 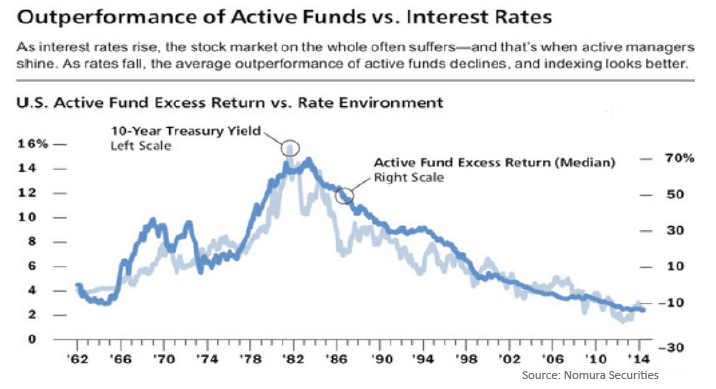 There’s a solid reason behind this phenomenon. When rates go up, you see lower correlations and higher dispersion between the best- and worst-performing stocks, an important factor for active managers. In periods of high correlation, when a large percentage of stocks move up or down in tandem, active managers tend to not be rewarded for their fundamental research. We’ve seen a strong example of this during the years of the Fed’s quantitative easing (QE). Since 2009, when the Fed began pumping liquidity into the economy to keep interest rates low, it has had the added effect of pushing investors toward risk assets like stocks. With the Fed’s QE acting as a “safety net,” we saw investors take on substantial levels of risk in the stock market, as well as other securities markets. Within the major indexes, low quality companies with high levels of debt and poor or non-existent earnings outperformed their higher quality counterparts. This makes for a particularly difficult performance environment for most active managers who specifically use research to select high quality companies for investment. As a result, they hold much lower percentages of low quality companies than are in the benchmark which doesn’t distinguish between levels of leverage or whether a company is profitable or not.

With the Fed having ended its quantitative easing program last October and laid the groundwork for its “lift off” in normalizing interest rates, we believe we’re rapidly approaching a period of rising interest rates. Based on historical trends, this would be an environment that would likely favor active managers.

When we couple this with the past cyclicality of active versus passive managers and recognize that we’re at historic lows on outperformance, we think that the stage has been set for a period in which active managers will have an edge in generating excess returns. First quarter 2015 appeared to confirm this as the dispersion in equity returns increased and the percentage of active managers outperforming their benchmark improved as investors anticipated the first interest rate hike since 2006.

Despite our sense that active management will likely experience a cyclical renaissance in the near future that does not mean there is no place for passive management in diversified portfolios. Each style has its advantages and we see no reason why an investor needs to limit themselves to one style over the other. Active managers give investors the potential to outperform the benchmark through superior stock selection, as well as to invest in a higher quality portfolio that tends to provide protection in bear markets. Passive investing is a lower cost alternative that offers index performance (minus fees) in all market environments and can offer tax efficiency. We believe that the best strategy is to use both wisely and filter out the noise that advocates necessarily using one at the expense of the other.

As has been shown by numerous studies over a series of years, it’s asset allocation rather than security or manager selection that has the greatest impact on portfolio performance over time. That’s why our portfolio managers focus so much attention on developing the appropriate strategic allocations for clients and implement tactical shifts in those allocations when it’s recommended by the Investment Policy Committee. Additionally, as a firm, we commit tremendous resources and energy to determining which active and passive managers we want represented on our investment platform so as to produce superior, risk-adjusted portfolio returns. With the proliferation of index funds over the past five years, representing a broad array of asset classes, the passive arena has taken on an enhanced level of due diligence on our part.

Within the active management universe, one of our selection criteria is that our managers maintain high “active share” or the percent of their portfolio that differs from the index. We want to make sure that our active managers can truly earn their fees and outperform their benchmarks rather than be “closet indexers.” Although this can actually hurt our managers’ relative performance during those periods when the indexes lead the pack, we firmly believe (and have seen historically) that it’s these same managers who will provide solid “alpha” once dispersion in stock performance increases. That’s when active managers are rewarded for their fundamental research, stock picking skills and conviction.

Some investment environments are better either for active or passive management approaches, but it is impossible to predict with certainty when the tide is going to shift in favor of one versus the other. Fund flows show us that recent investor sentiment has clearly favored passive management; however, we’re concerned that following the herd toward indexing at this particular time could, in fact, be abandoning active management at the point of “maximum pessimism.” We believe the current environment supports active management as the style of choice, though, as we pointed out earlier, we see no reason why investors need to make an either/or decision rather than embrace the benefits of each.